“Particularly interesting are Maureen St. Germain’s observations on what she calls the Phoenix Sequence. In a time of psycho-babble and political correctness, it is indeed refreshing to read something rooted in the timeless principles which remain as relevant to the human soul today as they have since the dawn of awareness on this planet. Good fortune.” Doug Kenyon, Editor, Atlantis Rising Magazine

In the book, Be A Genie you will find the foundation and staying power you need to produce your heart’s desires. With a few successes under your belt, you’ll come back over and over to the sacred geometry found in the Genie System. Learning the Phoenix Sequence will change the way you think. In fact, my files are filled with grateful client letters who took the course in those early years, learning the sacred geometry right along with the practices.

The mystery of the Phoenix Sequence enters here. It is related to the Fibonacci ratio – but much grander. I will show you, at this juncture, that you are now creating, using the principles of linear equations. Connecting two points, your current situation and after-event, in a linear equation (using the Phoenix Sequence), compels the Universe to create your heart’s desire. Letting the Universe fill in the “how” allows for the fastest, easiest solution, which you may not have any awareness of, to produce your heart’s desire.

What is relatively unknown is that any sequence created by adding two adjacent numbers to determine the third—regardless of its starting point—will produce Phi by dividing the tenth iteration by the ninth!

Pick any two numbers and add them together. Then add the result to the previous number nine consecutive times. Continuing in this fashion will create a sequence that follows the same (logarithmic spiral) pattern as Fibonacci’s, but not from its traditional starting point. Voila, a Phi ratio emerges as the relationship between the ninth and tenth numbers.

I call this class of sequences the “Phoenix Sequence”, because that magical number Phi emerges from it regardless of the two beginning numbers (Figure 14-9). 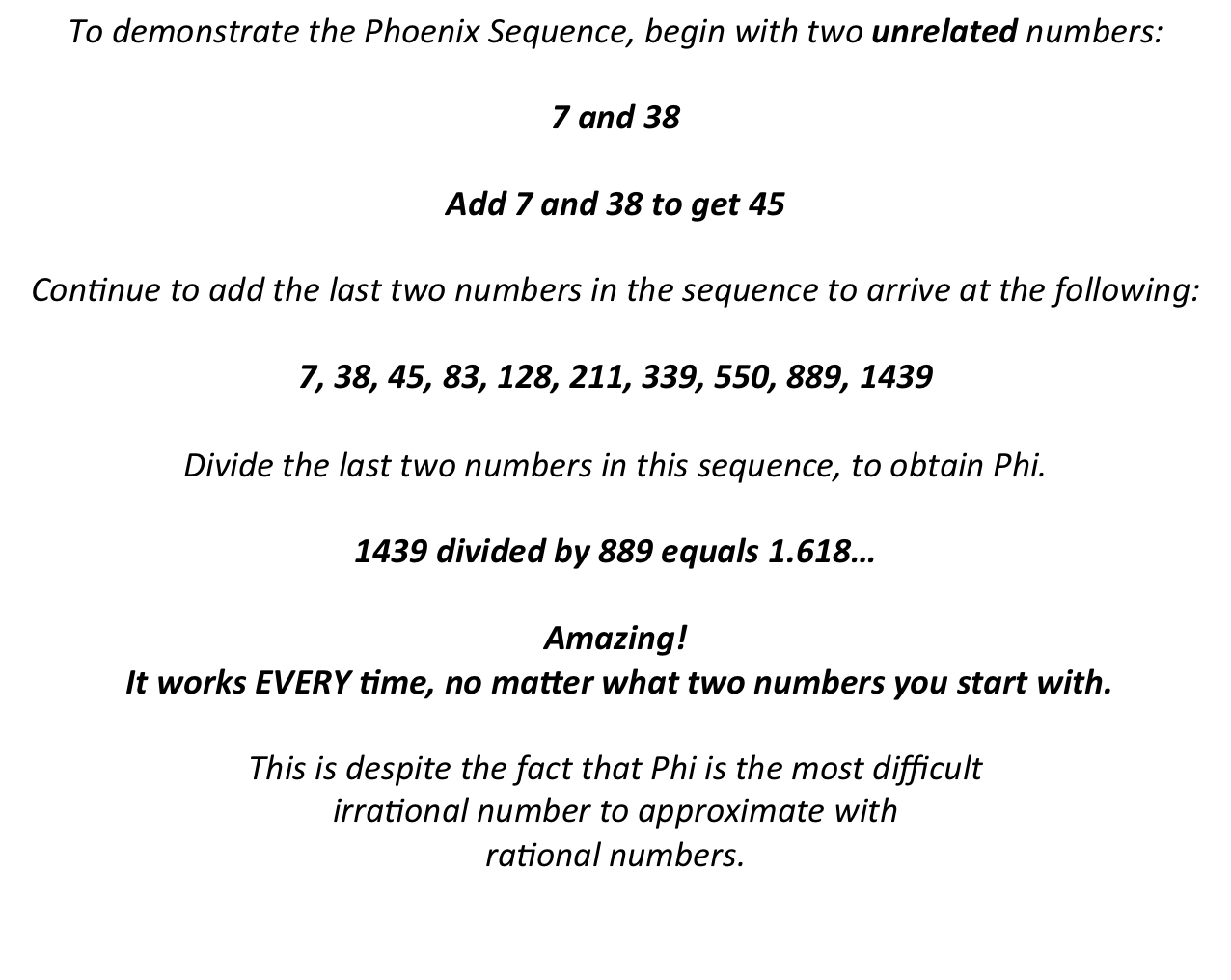 To examine the Phoenix Sequence more closely, let us start with any two random numbers. Add them together, and then add in a cyclic fashion producing a result, each time adding the result to the previous result. Repeat this process ten times. The final adjacent pair produces Phi. This is stunning! Try it for yourself!

Not only can you produce Phi from the Fibonacci sequence, you can produce it from every Phoenix Sequence by dividing any two adjacent numbers in this sequence after the ninth and tenth iteration. The Phoenix Sequence always creates this magical number Phi, no matter what two numbers you start with.

By using this blueprint, you will produce Phi every time you have completed 10 repetitions and created a ratio from the last two numbers. Sometimes a close approximation to Phi will show up before the tenth iteration. It depends upon how close the original two numbers are to each other.

Feedback and the Phoenix Sequence

Every Phoenix Sequence relies upon the results of the equation to calculate the next number. It relies on feedback from the prior result to get the next result. This is again the use of three. Current number, previous number and new result are the key to the Phoenix Sequence.

Another way to predict the next number in any Phoenix Sequence is to multiply the current number by 1.618… and round to the nearest integer.

Chapter 8 discussed feedback in much greater detail. Now you can see the dramatic importance of producing Phi through this means, because the feedback comes from within the system. Using existing data from a formula for the next computation is called recursive, a quality of feedback that produces Phi from a Phoenix Sequence.

Using the Phoenix Sequence, you can now apply it to a manifestation matrix. 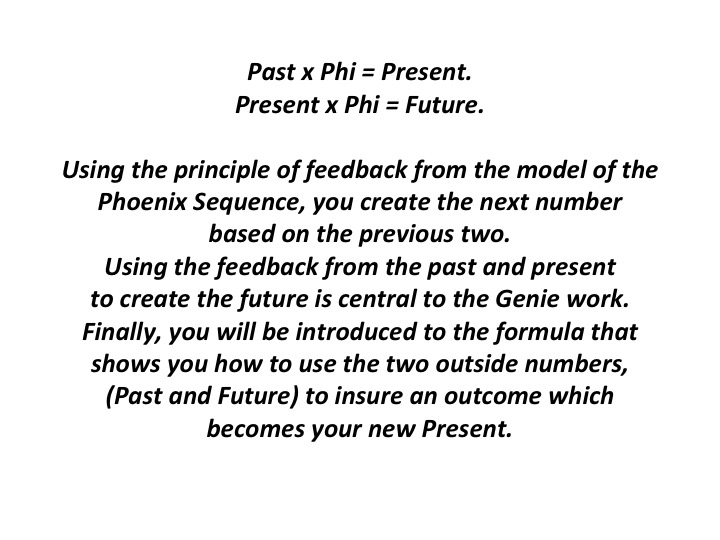 When you apply this method to your manifestation matrix, the past multiplied by Phi creates the present, and the past in relationship to the future produces Phi, thus guaranteeing the present to be in perfect harmony with your heart’s desire. Thus, looking at the past allows you to view in two dimensions, and looking at the future allows you to see into three dimensions. Looking back into the past you can see a straight line from one event to another. Looking into the future you have multiple possibilities, multiple directions. The present is the result of Phi acting on the past. By the same token, the present multiplied by Phi creates the future. Using this knowledge, called the Phoenix Sequence, you will unlock the secret of manifestation.

The Phoenix Sequence is a term I coined to establish the meaning and value of the recursive additions producing Phi. Even though you may have read of it elsewhere (it’s been “borrowed”), it started with me, defining it in the original version of this book, You are the Genie in the Bottle, back in 1994 when it was first released in manuscript form.

Fibonacci is inaccurately credited with discovering the mathematical sequence that bears his name. This sequence begins 1, 1, 2, 3, 5, 8, 13, 21, 34, 55, etc. and goes on infinitely. It is calculated by adding the last two numbers together to find the next one.

Fibonacci also studied the sacred geometry of the Great Pyramid in Egypt, noting all the Phi relationships in its structure. He was known for many things including convincing Europeans to shift from the use of Roman Numerals and adopt “Arabic” numbers and their numeric system based on ten.

The Fibonacci sequence is important because it is found in both organic and inorganic matter. It determines the growth pattern of all life, from the molecular level of the DNA to the cosmic level of galaxies, and is directly related to spirals. The fact that this relationship permeates all of the creation gives pause for thought and holds the key for manifestation!

The Fibonacci sequence approximates growth based on Phi and can be used to calculate an estimate of the Golden Mean, Phi.

Phi (1.618…) and phi (0.618…) are reciprocals. Spirals are another expression of Phi, swirling infinitely inward with phi and infinitely outward with Phi. Phi, by its very nature, replicates itself in relationship to itself.

An estimate of Phi can be derived from every Phoenix Sequence carried out to the ninth and tenth iteration by creating a ratio of the last two numbers. The Fibonacci sequence is one of the most easily identified versions of the Phoenix Sequence that nature uses to create. 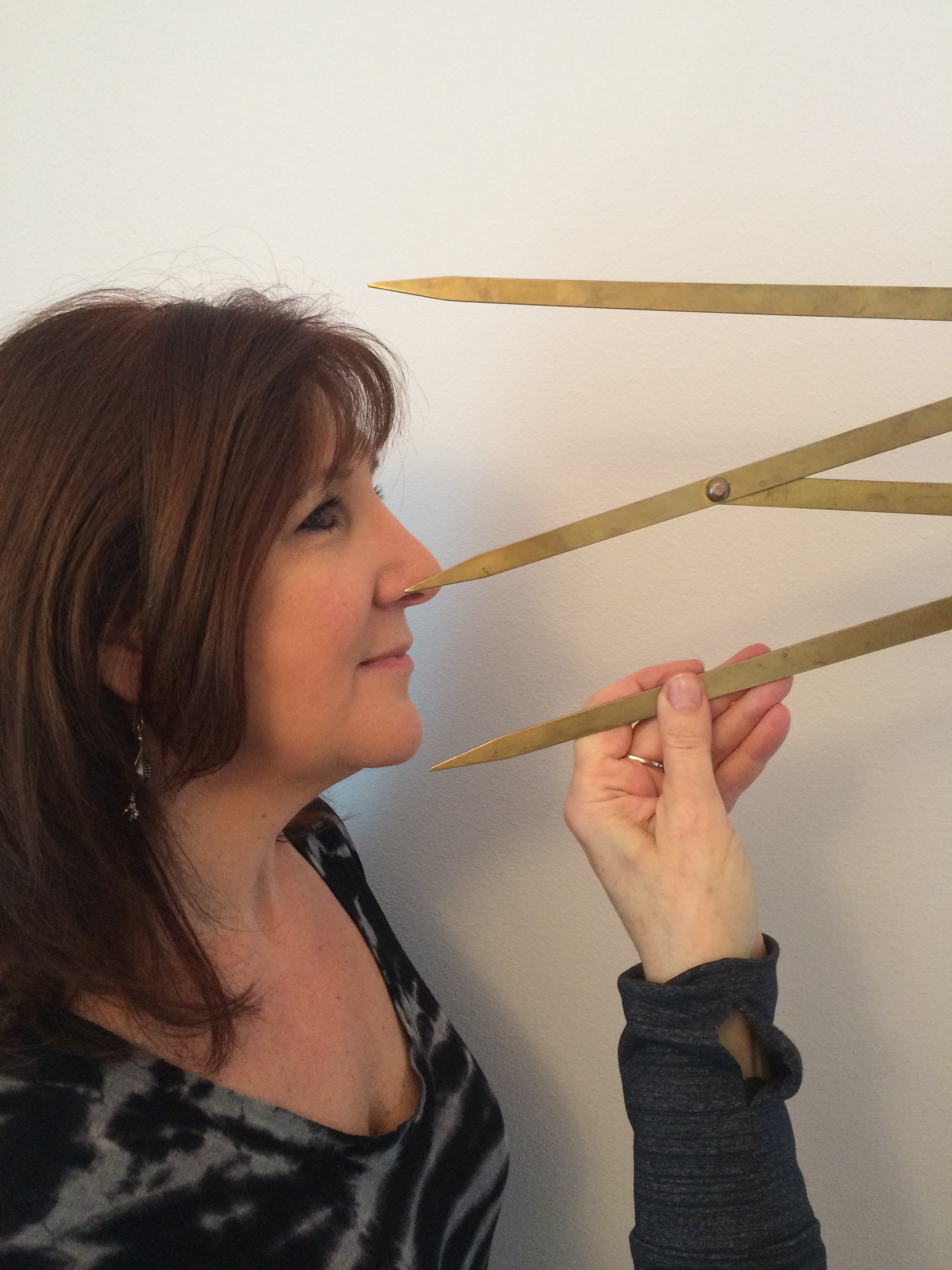 Phoenix Sequences rely on feedback to perpetuate themselves. They rely on the previous results to create the next result. This quality is named recursive and represents feedback.

Another way to predict the next number in any Phoenix Sequence is to multiply the current number by Phi and round to the nearest integer.